Rosalyn Dennett is a fiddler, singer, songwriter, and multi-instrumentalist who has established herself on the international roots scene through her role as one of the founding members of the highly acclaimed quartet Oh My Darling. With four nominated albums, headlining four international tours, and sold out shows across the country, she has also travelled extensively through Ireland, Appalachia and Louisiana to pursue her love of traditional music. Some of her projects include Ken Whiteley & the Beulah Band, Pigeonhawk Stringband & Old Pony (Old Time Appalachian/Bluegrass), Bon Fer (Cajun/Zydeco), and many more. Rosalyn has had the pleasure of performing with Donovan Woods, Fred Penner, David Francey, The Fugitives, Zachary Lucky, Kaia Kater, the Crooked Brothers, Gabriel De Santis, Hannah Shira Naiman, Shawna Caspi, Sarah Jane Scouten any many more great artists and has recorded on over 20 albums as a freelance musician.

Rosalyn is an elected director of the Board of Directors for Folk Alliance International, Folk Music Ontario, and AFM Local 1000. She is the current Licensing & Outreach Coordinator for the Canadian Federation of Musicians. She has previously held positions at Music Canada, MusicOntario, Canadian Independent Music Association, Canadian Live Music (formerly Music Canada Live), and is the Co-Founder of STUMP MEDIA and Smiths Falls Music. 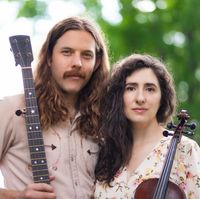 We are excited to be returning for a second year of Music by the Basin at Centennial Park, Smiths Falls. Friday at 2:00pm! Come on down by water and enjoy chill vibes and cold bevvies, with a fantastic lineup of local artists: Rosalyn Dennett & Rob McLaren.